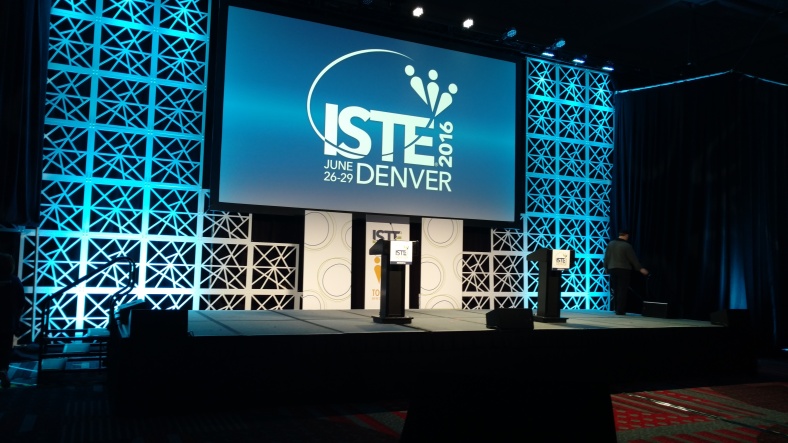 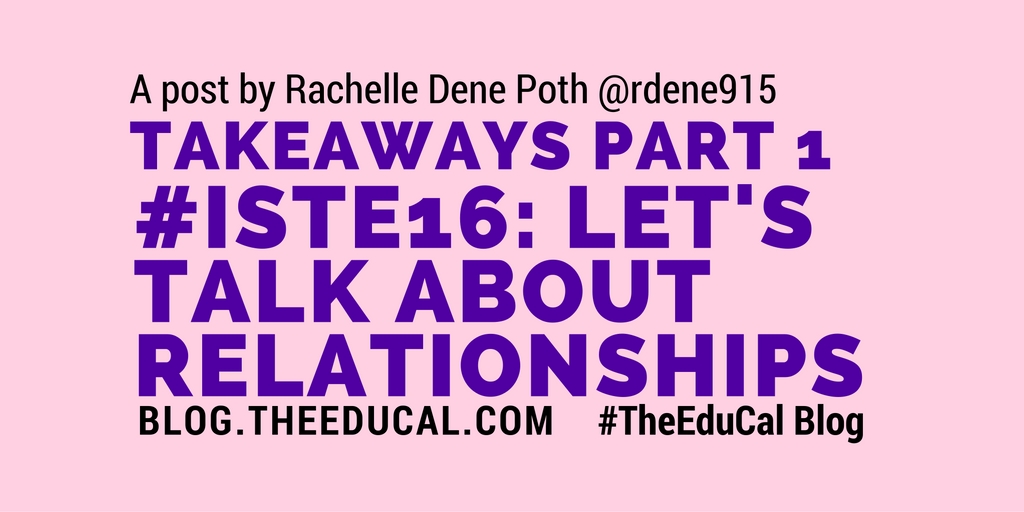 Let’s talk about the relationships (part 1 of a series)

ISTE (International Society for Technology in Education) is a conference that draws in people from all over the world and all levels of education and technology. With an estimate of close to 20,000 people from 70 countries in attendance, this year’s conference was tremendous. An event so large but yet at times seems so small, when you find yourself running into the same people in different areas of such a large event space. It has so much to offer, that it is hard to do it justice by summarizing or simply writing about one aspect of it.  So I thought I would highlight a few of the biggest takeaways that I had, and ones which I gathered from others.

Going to ISTE? What can you expect?
There are a lot of discussions and questions leading up to the conference. For people attending for the first time, the most common questions are: What sessions should I choose? What type of clothing is appropriate? What items should I carry in my bag? What should I expect? What are the “must do” events? and many more questions like this.  Simply put, where do I begin?

I myself was a first-time attendee last year and had absolutely no idea what to expect.  I had been to many different conferences, but none as large as ISTE. I was nervous about not really knowing a lot of people there.  I was fortunate to have just gotten involved with PAECT (Pennsylvania Association for Educational Communications and Technology) and two of the ISTE networks (MLN and Games & Sims).  Being involved with these organizations helped because I knew some people and had some events lined up, but I figured the chances of seeing them with all of our different schedules, were not too likely. 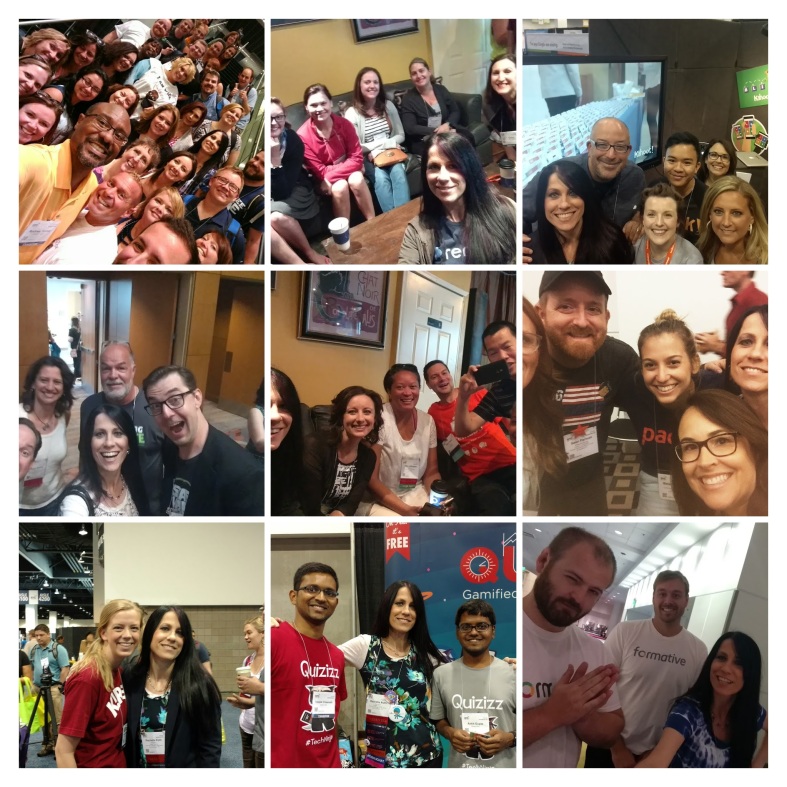 I tried doing some research, asking questions on social media, reading through and studying the ISTE website to learn as much as I could. I think I studied the program multiple times every day, each week leading up to my travels to Philadelphia. I had a nice schedule planned out, my favorites marked and areas that I wanted to focus on, so it seemed like I was ready to go.  But as I quickly learned last year, and definitely felt the same this year, is that it really doesn’t matter what you decide to do, what schedule you set up to follow, whether or not you know anyone, because no matter what decision you make you can’t go wrong. Honestly. There are no “wrong” or “bad” choices because there are opportunities everywhere. Even if you have a schedule, it is really tough to stick to it. And if you are traveling alone for the first time, don’t worry about being alone. It is a place for building relationships and making connections above anything else. So if you want to learn what ISTE is about let me start by telling you about the relationships and why they matter.

It starts with relationships: The value of connections

I had to conquer a big fear this year: my fear of flying. Last year, I traveled by Amtrak to Philly, and it was no problem. I don’t mind traveling alone, I use the time to read, participate in Twitter chats, catch up on work, and enjoy the trip.  But this year, preparing to travel to Denver, with my fear of flying, something I have not done in 21 years, was a bit difficult.  I have avoided air travel, preferring to drive or take a train any distance. However with Colorado being a bit far of a drive, bus ride or travel by train, I was not left with much in the way of options. So that meant flying. Fortunately, I had a good friend providing me with the support to help me get to the airport, get on the plane and get to Denver without worry. At least not too much. I just kept thinking about the week ahead.

My support for the travels started with another conference.  Karyn and I met at a Keystone Technology Innovator Summit in Pennsylvania a few years ago. I was also fortunate that at Karyn had another friend traveling with us, Chris, so I had two amazing companions to ease my nerves and it really made a huge difference during the flight and throughout the conference.

Relationships started through Social Media.  Now aside from the travel, another tremendous part of this experience was a group that originated on Facebook, educators connecting in an ISTE2016 group.  The group then transferred into a Voxer group created and led by Rodney Turner. We communicated in the weeks leading up to ISTE. Lots of conversation, lots of questions and more than anything a ton of inspiration and excitement fueled by the chatter, the shared experiences, the anticipation and even more so, motivation provided by the guidance of our named “Concierge Rodney.”

He started each day with a Vox, a countdown to ISTE, an inspiration and a story.  He brought a bunch of people together, a group of connected educators, who became friends, excited to meet F2F after developing these relationships. Becoming friends through technology. I could hardly wait to meet the members of this group, officially, because we had already learned so much about each other. And we even had t-shirts and stickers made for our group, thanks Mike Jaber.

And at conferences like ISTE, meeting your “Tweeps” and #eduheroes finally F2F is a possibility.  Even though we all feel like we already know each other, after many Twitter chats and social media interactions, it is nice to be together and talk (about technology) without the technology.

Having these core groups to connect with is something I highly recommend.  All it takes is one or two people and you can build your entire group, so at no point do you feel alone during the conference. One of Rodney’s messages was to be on the lookout for people you notice sitting alone. If you see someone sitting alone, go over and start a conversation, invite people to join you, be welcoming, and it worked. We had our “VoxUp” in the Bloggers Cafe on Sunday before the Keynote, and what a great experience that was.  There were lots of hugs, laughs, smiles and excitement.   This was truly a defining moment.  In looking around, people joined in this group, new connections were made, the excitement and power of this PLN was contagious.  All it took was joining in a group, taking that step and becoming part of something, and having a support system already in place.  Looking around the Bloggers Cafe, there were a lot of small groups of people, gathered to listen to the Keynote, take pictures, make new connections, network and just to absorb everything that was going on. No matter where you looked, you could see the energy and excitement. The energy was so high and it was just the starting point for what would be a phenomenal 3 day event.

So, what should your plan be?

Well, maybe the best plan is to not have a plan.  Maybe just have an idea. A focus.  Time goes by so quickly and the choices are so numerous that it can be overwhelming, especially for a first time attendee.  Not everybody can make the same decision about what would be the best session or event to attend. You have to make your own decision and even though there is comfort in going to a session with somebody you know, it is equally if not more beneficial to go your own way, interact with other educators and create new relationships.  You can then come back to that core group with new ideas and new friends, and you never know, it’s such a small world sometimes that you might all know the same people.  And by going to different sessions and different events, there are more stories and experiences to be shared. So the learning possibilities are even greater.  And friends made along the way become part of different groups but connected into one.
Having these different groups really added to the experience.  We shared ideas, attended events together, grabbed early coffees at Coffee Edu, and so much more. Even if you weren’t at ISTE, you could join in virtually and be a part of the ISTE community as well.  The idea behind attending conferences like ISTE is to make new connections, gain new knowledge, to grow professionally, and to explore.  I can’t think of a better way to start doing this than by focusing on relationships. It is where I start each school year and it is where I focus for conferences like ISTE.

(#coffeeEdu, Thanks Craig Yen for Periscoping for #notatiste)

Share your thoughts and experiences and photos, we would love to hear from you! Next up, focus on some of the ISTE events and takeaways.

Check out my books

Click: Books Page below for information on how to order signed copies! Or go to bit.ly/Pothbooks

My Tweets
Join 34,239 other subscribers

Ignite a Culture of Innovation

Informed by research, refined by practice

Rocking today's classrooms, one teacher, student, and class at a time.

Education as it should be - passion-based.

Join me, Allyson Apsey, as I stumble upon the fortunes of learning, laughing, and celebrating alongside incredible people.

Applying Cognitive Psychology to the Classroom